Home » Uncategorized » In Our Own Voice training 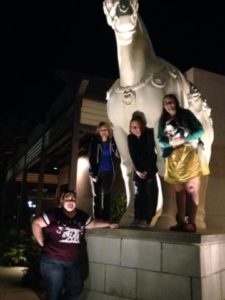 This weekend Hestia and I went to Greenville, SC for training for a NAMI program called In Our Own Voice, or IOOV.  We rode up on Friday night with Kakhi who was so kind to give us a ride, and we got there just as the others from our affiliate were getting ready to go to dinner.  So we all hopped in the car, drove briefly the wrong way on a 4 lane divided road, and ended up at PF Chang’s.  I had never eaten there before!

It was SO much fun!  We got a big curving booth to fit all five of us (6 including Hestia) comfortably.  I got fresh pressed ginger beer (non-alcoholic) to drink and lobster and avocado sushi.  It was YUM!  WOW!  I will definitely be back.  We stayed late at the restaurant, talking and hanging out.  We had wonderful waitstaff, and Hestia gained several admirers.

When we got back to the hotel, we talked for a while with Kakhi and Melanie as we were sharing a room.  Kakhi was kind enough to share a queen bed with me instead of one of us having to sleep on the pull out sofa.  We talked as we were falling asleep, just like I used to do at sleepovers when I was a kid.  It was fun!

Hestia had a hard time falling asleep because in Brad’s spot on the bed was Kakhi!  So she had to walk all over Kakhi and try many positions of lying down before she settled in to sleep.  Luckily Kakhi is a heavy sleeper because Hestia got me up quite a few times in the night to “potty” (really hoping to get fed her breakfast early, which did work…..).

Anyway, the next morning we were up early and headed off to the IOOV training at the Greenville Hospital.  The training was really helpful, and I am excited to do my first IOOV presentation soon!  The presentation involves some short video clips, and two presenters telling their story of what happened, what helped, and what’s next.  It is an interactive presentation, so we talked not only about what we’d say during the prepared section, but also about how to handle questions etc.

I drank a lot during the course, so I had to use the bathroom frequently.  For those who don’t know, I have a really hard time using public bathrooms.  So Hestia’s training in bathrooms has been a little lax.  I want her to stand stay in the stall with me.  She is small enough to walk under the dividers between stalls without even tucking her head!  So I have to work to keep her focus on me and not on wanting to explore other areas of the restroom.  Anyway, I was so proud of how she did in the restrooms that, yup, you guessed it……  I took a picture LOL!

The training was really great, I made some new friends, and learned a lot.  We got a group shot of all of us together after the training was over, and I got a pic of Hestia and me in front of this awesome fountain which was a granite ball circling around on a thin layer of water.

We are home now, and are wiped out!  Hestia is already asleep, and I am about there as soon as I finish uploading pictures and writing this blog entry LOL! 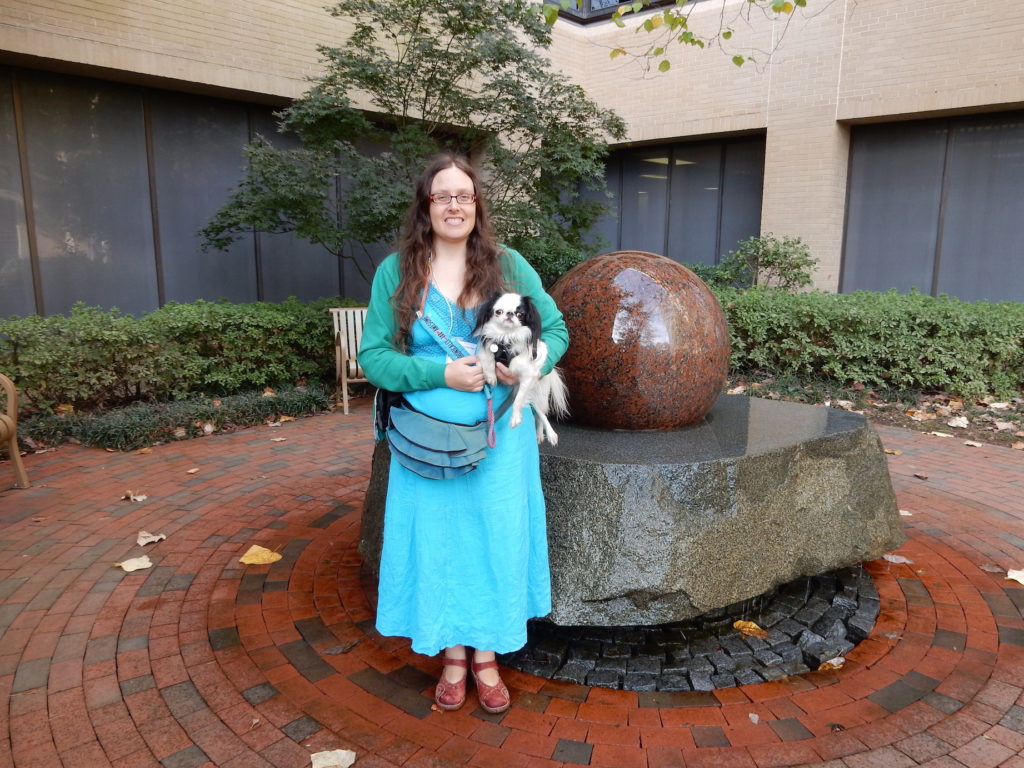 Veronica and Hestia, both decked out in turquoise, in front of the granite ball fountain

2 thoughts on “In Our Own Voice training”