Last night we had week 5 of our pre-agility class.  Hestia rocked it!  It was so much fun—you should check out the video!

We started with the pinwheel jumps, which is when you have three jumps in a circle.  Hestia did a pretty good job going over the jumps without me having to be RIGHT next to her.  She did miss a jump or two as I was trying to get her to have more distance, but overall she did very well.

We also spent more time on the tunnel.  Hestia LOVES the tunnel.  I think it is both of our favorite things in agility.  We worked on making the bend in the tunnel bigger and bigger, so that it was closer and closer to how it will be in a real agility course.  Hestia had zero problems with the tunnel! 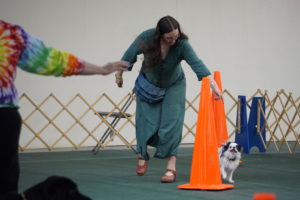 Then we went to the playground ring which has all kinds of stations where we can practice.  There is a cones station to practice our crosses (when you change the side of your body that your dog is on).

They had the ladder and poles on the ground to keep her aware of her back feet.  They had the tire jump (where Hestia actually had to jump, even at the lowest setting!).

Of course we did the teeter and wobble board for fun, and we spent a bit of time on practicing walking planks that make up the dog walk, but really close to the floor.

It was awesome.  I’m remembering how much fun I had with agility and Sabrina, and thinking it would be OK if agility were Hestia’s “thing”.

Here is a link to all the pictures, followed by the video Brad made.