Home » Uncategorized » A delight at the museum 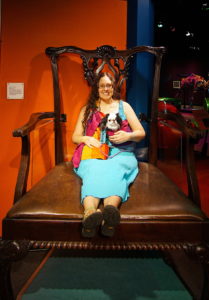 The Discovery Place Science museum has a Ripley’s Believe it or Not exhibit that is leaving on Sept 4th.  I love this museum– people with food stamps (SNAP) can get in for $1 each, and parking is only $8 instead of $12.  So it is a great date activity for us, we like to go each time the exhibits rotate.

Yesterday on the spur of the moment we decided to go to the museum, as I was not nauseous!!!!!!  I wanted to take advantage of that, the first time in probably 2 weeks that I’ve not been nauseous.

I wanted to really take in the exhibits, which I couldn’t do while working on heel training with Hestia, so I pouched her.  I loved having her right there, it was so helpful for my anxiety being out in public and everything. 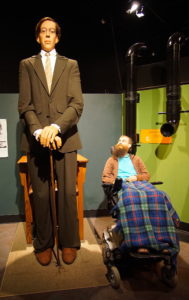 The Ripley’s exhibit was a lot of fun!  They had a huge chair there that was built for one of the tallest people ever.  And we could even sit in it!  Hestia and I look so tiny in the picture!

After seeing weird taxidermied animals, out of the corner of my eye I saw something that really startled me!  It was an animatronic of the world’s tallest person, and they had him sitting down and standing up and moving his head around.  It was really freaky because he really looked alive, and yet he was not, and he was SO tall.  A lot of the kids at the museum had fun watching him and screaming whenever he got up or sat down.

Next they had a giant tube that was made to the specifications of the largest snake ever.  It was big enough that you could crawl through it.  It was pretty awesome.  I had a great time crawling through, but almost couldn’t get up the steep slippery mouth at the end (oh yes, and the picture of me rubbing my head is because I bumped my head on the top of the snake LOL!).  I bruised up my knees doing all that crawling through the snake, but it was worth it!  It was so much fun!

We saw a picture of Albert Einstein that was made out of toast and got a hilarious picture of Hestia looking totally not impressed.

They had a cool room where your outline was projected onto a  screen in front of you.  It was really neat!  The reflective patch on Hestia’s pouch apparently wasn’t detected by their software, so it looks like I have a hole in my chest lol!

Then we came to the cave of crystals exhibit.  For some reason Brad chose here to try to do an emotion photo shoot.  He would tell me an emotion, and I would try to pose like that for him to take a picture.  It was too funny, and we ended up with some really silly pictures.

We got scared by a Saber Toothed Cat skeleton all the way from the La Brea Tar Pits.  Well, we weren’t really scared, but we took pictures like we were!  They are pretty funny!  In my picture I am looking terrified at the cat, and Hestia is looking up at me like “what in the world are you doing?”

After the Ripley’s exhibit, we went to the frog exhibit.  I had a hard time finding the frogs…  Just another reminder that I need to go to the optometrist.  Last time I went, they couldn’t correct my vision to 20/20, and told me I needed to stay on top of that.  Well, of course I haven’t….  Don’t want to have to turn Hestia into a guide dog!  At least if she did, I’d know I’d never step in a puddle.  Hestia HATES puddles!

We explored more of the museum (it is a small museum, but there are still parts we haven’t seen yet due to our getting too tired to see the whole thing).  We found a water table where I could pet a sea cucumber (which felt like a fuzzy pickle), crabs, and all the other weird things they had there.  The assistant was surprised I knew what the sea cucumber is, so I told her about Sea Pigs (this hilarious video about a sea cucumber that is pink https://www.youtube.com/watch?v=_y4DbZivHCY ).

We saw about half of the aquarium before I got too tired to do anymore, and Brad wasn’t faring much better.  So we headed home.  We will see more stuff next time we go, because there definitely will be a next time!

Here are all the pictures, enjoy!

6 thoughts on “A delight at the museum”