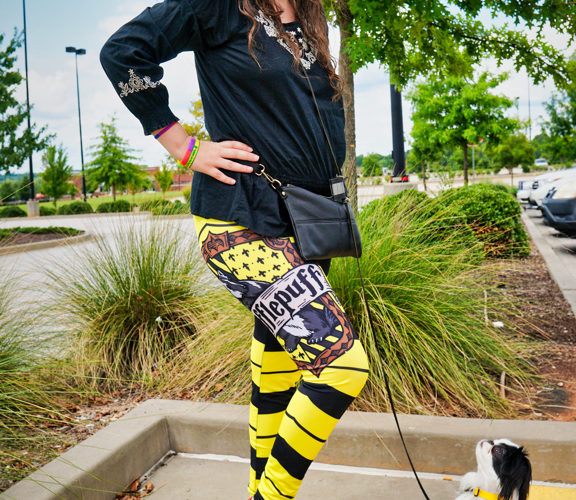 Before you say anything about the title- Brad came up with it!  He actually comes up with most of our titles.  I just wanted to be clear that I don’t think of myself as a “hottie”!  But it was a good title so I went with it.

Anyway, today was the first day since my birthday that we left the house.  I just HAD to wear my new Hufflepuff gear.  So even though the temperatures today are in the upper 80s, I wore my Hufflepuff leggings and a long sleeved black shirt.  Of course Hestia wore her Hufflepuff vest!

We went to Sam’s to stock up on fruit.  We’re eating loads of fruit these days since we’re not eating sugar.  It makes a great snack, and also a great dessert!  In the parking lot on our way in, Brad snapped a couple pictures of Hestia and me in our Hufflepuff splendidness.

I actively trained the whole time we were in the store, and Hestia did a very good job!  I had kinda gotten lax with all our travel and had been allowing her to pull…  so it was back to work and it was fun for both of us.

When we left, we went out to the parking lot to get our car.  We were parked in an accessible space with a hash marked space next to us so Brad could get in and out of the van.  Unfortunately the person who had parked next to the hash space was almost halfway taking up all of the hash space!  It was really upsetting!  Yes, they had a disabled placard, but that doesn’t mean they can take up the van accessible hash marked space!

I had to back the car out of the spot in order for Brad to get in.  If I hadn’t been there, he would have had to wait until that person was done with their shopping to get back in the van—in other words, he would have been hostage to the bad parker. Grrrr! 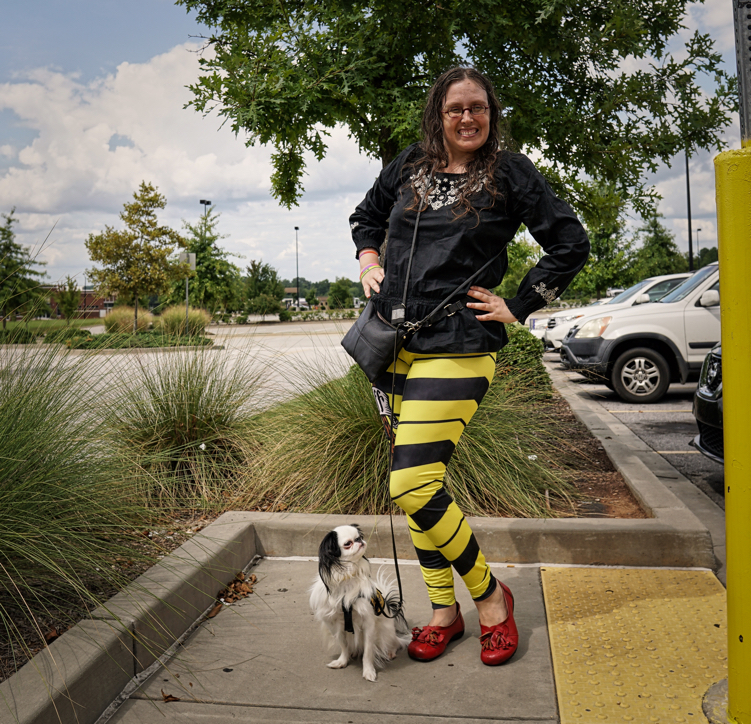 Veronica wearing black and yellow striped leggings and a black long sleeved shirt,and red shoes. Hestia is wearing her Hufflepuff vest. Veronica is posing with her left leg out. 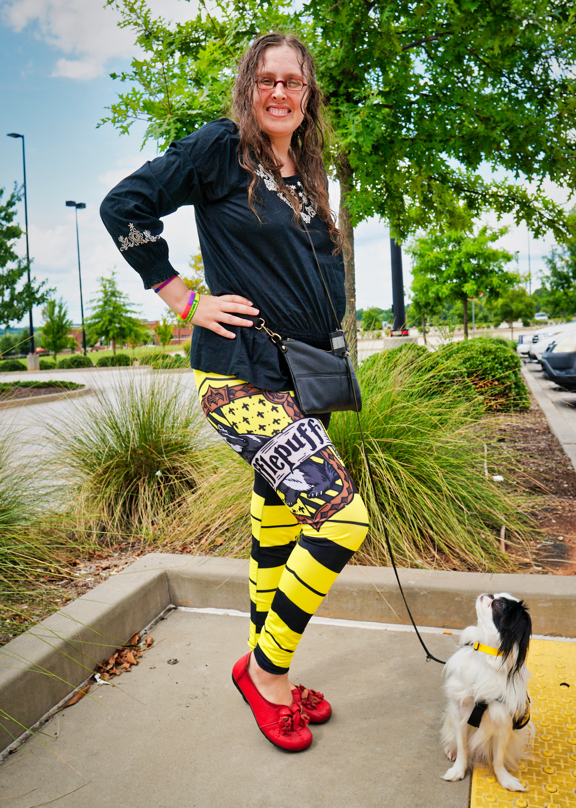 Veronica holding her right leg out, this leg of the leggings has the Hufflepuff crest on it! Hestia is watching Veronica closely! 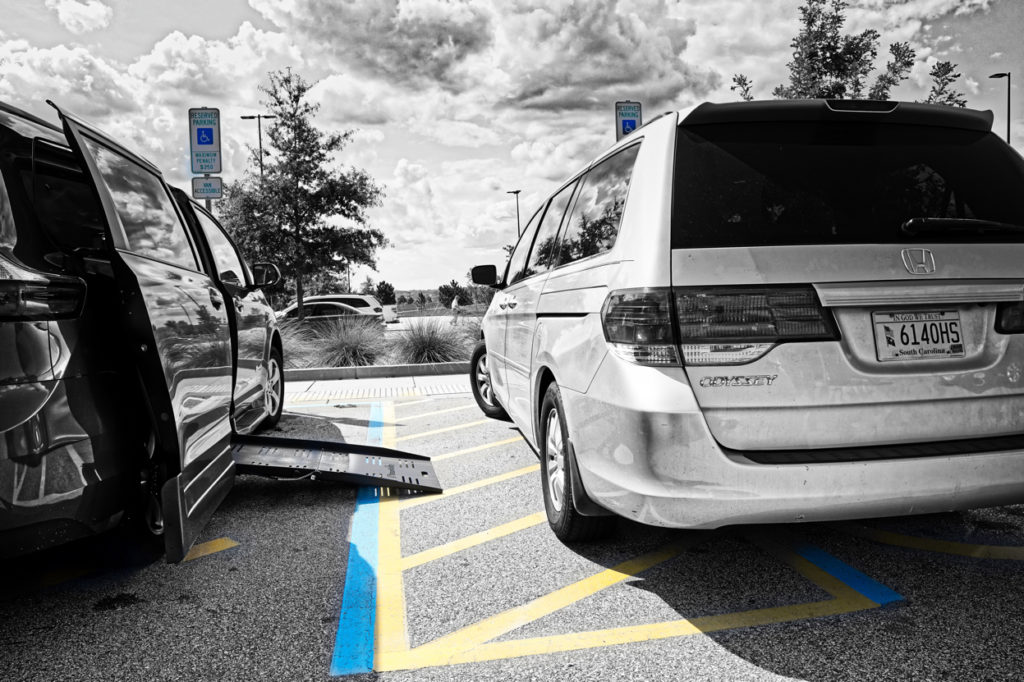 Picture is mostly in black and white with just the disabled hash marked space in color. A van is pulled up to about half of the hash marked space, and the ramp from our van is open, showing how there is no room for a wheelchair to get into our van. 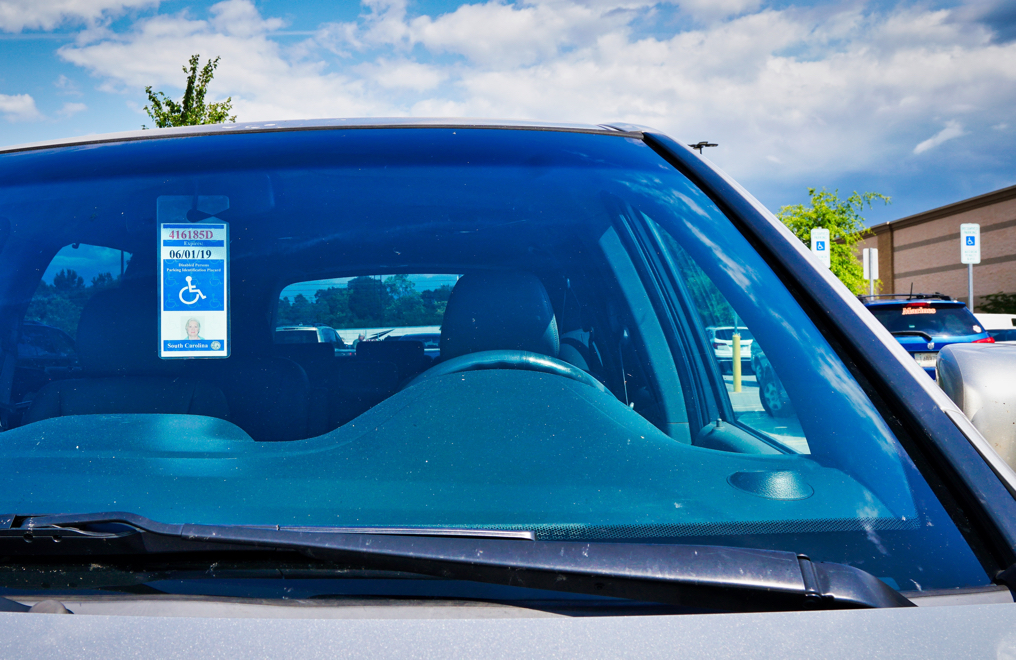 This is the van that was taking up the hash marked van space. 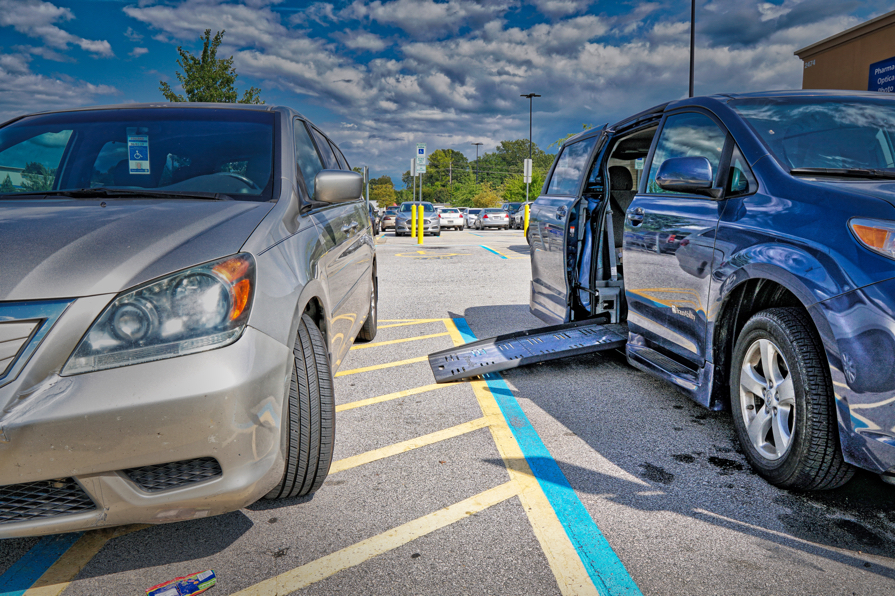 Picture from the other direction showing the front of our two vans, with the other van clearly taking up most of the accessible space. 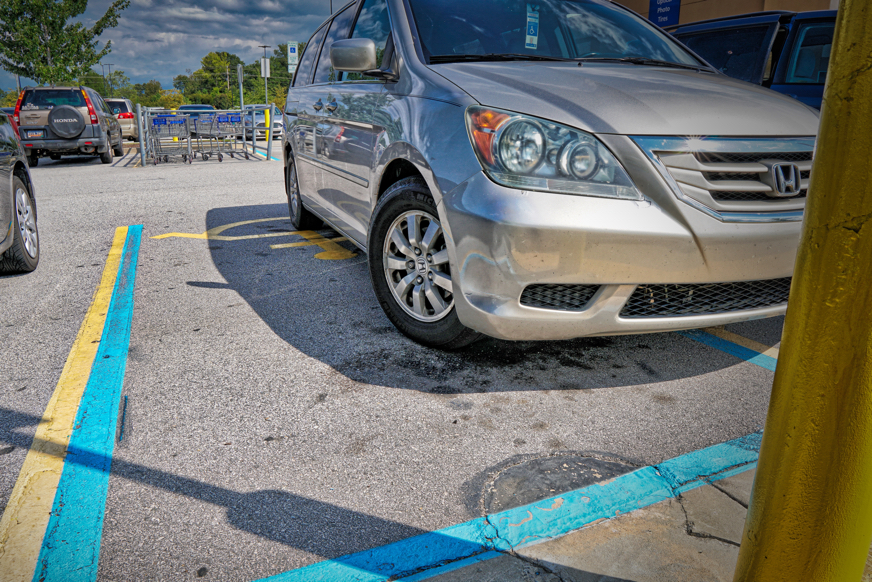 Picture of all the extra space the other van has on the other side of the parking space.