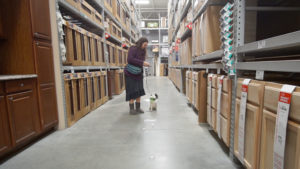 (Heeling video below) Today we went out to lunch with Brad’s family at Sake Express.  We have been there many times before without incident.  Today we were approached by the manager and I was told that while she appreciated that Hestia was a service dog and indicated towards her vest, I could not have Hestia on my lap under the table.  I replied that she is required to be there for disability mitigation.  She argued with me about it a little, until I told her to go look on the ADA website.

When she came back to our table about 10 minutes later, she said that emotional support animals aren’t allowed.  I had never said what type of dog she was, and she was wearing her Harry Potter vest which doesn’t say anything about what kind of dog she is.  So I replied she is not an ESA, and gave the medical response answer so I didn’t have to disclose my disabilities.

So then we started in with the education, informing her of the two questions she should ask, and answering other general service dog questions.  Since we always kept it polite, we were able to educate effectively.  We did not get upset, just said what was required and explained anything she didn’t understand.  So public access challenge overcome!

We still wanted to work on Hestia’s heel and get a video, but we decided not to do it in Sake Express.  Instead we collected some bits of trash from our meal like straw wrappers and so on, and took them over to Lowe’s.

We went to an unpopulated aisle, laid down the trash, and walked past and then over it.  I was a bit confused about what to do when she left it as soon as I said to leave-it instead of sniffing it and then leaving it.  We thought she had a behavior chain of leave-it, sniffing the item, then looking back to me.  But I was a little flustered when she left it without investigating it any further.

Still, to make sure she doesn’t have a chain going, I had her do another behavior after the leave-it like a loop and then rewarded.  If I am doing this wrong, please correct me!

I also did a few getting into heel practices with having Hestia stay while I moved, and then call her into heel position.  She was much more calm about that and found heel pretty well.

We saw another dog in the store, and I told Hestia to leave it and immediately she made eye contact with me and walked right past that dog in a perfect heel!  Brad wanted to find the perfect electric stapling gun, so I had a lot of time to work on those things while he read all about the options and even called one company to clear up something he didn’t understand.

So training is going well, though I’m almost out of kong stuffing!  I’ll have to go to the pet store sometime in the next couple of days to get more stuffing!