Home » Uncategorized » Carie and the carousel

(There’s a fun carousel video in this post!) Yesterday we went to Concord Mills mall to meet Carie!  She doesn’t have a service dog yet, so she got to see a slice of the service dog life.  Speaking of a slice of life, Brad is wearing his Freddy Kreuger style sweater in a power chair.  I am wearing my blue and gold sari silk skirt, with a turquoise shirt and then my green owl sweater over top.  The owl sweater uses cabling to make the owls, and I made it myself!  Carie is wearing a dark blue shirt with sparkles around the neckline, and she is in a manual chair. 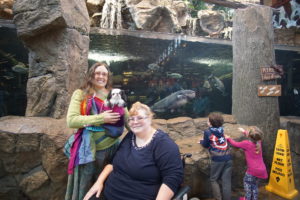 I decided that I would push Carie (with permission!) and pouch Hestia.  I should work on training her to heel next to a wheelchair I am pushing, but I didn’t think a busy mall was the appropriate place to try to start working on it LOL!  I will make Brad use the manual chair and push him around and work on it sometime later (Brad does not agree to be uncomfortable just so I have a better training prop, he he).  I remember it being difficult to work with Ollie when I was pushing Brad in his manual chair at first.

We started out in Bass Pro Shops, and took pictures in front of the big fish tank.  Most of the pictures are really good of the humans, but there is one picture (not so great of the humans) where a big fish appears to be smiling for the camera!

We walked around the mall a bit, and went into a store called “Man Cave“.  It was pretty funny and they actually had a lot of cool magnets!  They had the houses of Hogwarts, Platform 9 3/4, Mischief Managed, and one that says “catnado”!  Brad took a special picture for our friend Scarlet of the Supernatural themed magnets 🙂

We had several people commenting on what a cute dog Hestia is while going through the mall, but it wasn’t until lunch that we started getting the full service dog effect.

First a security guard and a cleaning lady were talking about Hestia from about 15 feet away for a long time.  I couldn’t hear them of course, but though they started out looking stern, they ended up looking happy.  And most importantly, they didn’t bother us.

As we were sitting at the table, chatting, and since we were done eating, I was sitting back from the table and allowing Hestia to pop her head up.  One lady was walking by and she nearly screamed in delight as Hestia moved.  She explained that she thought Hestia was a toy…  until Hestia moved!  The look of shock on her face was priceless!  She ended up eating near us and spent a lot of time watching Hestia 🙂

After lunch, we went to the carousel!  I have lost enough weight that I can ride one now and carry Hestia, too!  I was very happy to be on the carousel.  There were a lot of little kids at the mall today (pre-school age, and it was a miserable day out, weather-wise).  Many of the little kids were eating their lunches on tables centered around the carousel.  They LOVED seeing Hestia in her pouch on the carousel, and we had fun waving back and forth hello with them.  Brad made a movie of us on the carousel (of course!).

After the carousel we headed back to the entrance, and had some funny encounters along the way.  One young man came up to me and it turns out he has a Japanese Chin at home with very similar markings!

But the weirdest interaction of the day was one middle aged woman who came out of a store and started walking with us.  She was wide eyed, and I think she kept saying how cute Hestia is.  She was kinda quiet so I was lipreading, but I think that is what she said.  Over and over and over again.

And she kept getting closer, and closer, and closer to us.  Carie even started leaning away from the person, she was strange and creepy!  Luckily we ducked off into Bass Pro Shops and lost her!  I thought for sure she’d be with us until we went to our cars or something.

So Carie got the full service dog experience, stares, weird comments, being talked about, etc.  She also got to hold Hestia for a while, which Hestia LOVED so long as Carie was giving her treats LOL.

On our way out, we stopped by the shooting range at Bass Pro Shops and Brad did some shooting.  He didn’t aim for any of the taxidermied animals, but rather at all the other targets around the scene.  He was pretty good at it, too, and I got some pictures.

It was a fun day, but boy it tired us out!  You can see all the pictures (the ones that aren’t also shown in the carousel video) here:

4 thoughts on “Carie and the carousel”