Home » Uncategorized » The ER sickens me 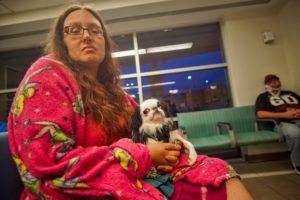 Yesterday, as soon as I got home from the grocery store, I started feeling very lightheaded and fainty.  I lay down on the couch and tried drinking lots of water and eating salty food in case it was my blood pressure.

Turns out it was not a good day to go to the hospital because all of the beds were filled.  So I had to wait in the waiting room the whole time.  A few times they pulled me aside for tests– an EKG, X-ray, and blood tests.  Since my case was a difficult one, they wanted to wait until I had a room to talk with the doctor.  That meant waiting for 4 hours in hard uncomfortable chairs, retching, feeling extremely lightheaded, and generally miserable.

I just couldn’t sit upright anymore, it was making me so dizzy and nauseous, and Brad asked how long it would be until I got a bed and they said it could be hours as all the beds were full.  So we decided to just go home and relax and hope I got better overnight.

I went to bed still feeling really ill, and I didn’t sleep well, but when I woke up I was feeling better.  I was able to eat breakfast and lunch and drink a poweraid despite residual nausea.  I still have a horrible headache. 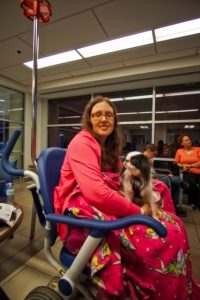 We were planning to go back today to finish getting test results and such, but I really don’t want to leave the house.  So maybe we’ll go request my medical records soon so I can see what the outcome of the tests were.   I’m hoping I don’t have to go back later today!

Brad took some pics of me during the ordeal, because what would an outing be without pictures LOL?!

Luckily I am feeling better today.  Just a little nauseous and a headache.  Hoping the fainting doesn’t come back because I don’t feel like going anywhere today!  Here are all the pictures:

4 thoughts on “The ER sickens me”