Today we braved the outside world for platforms class and a visit to my psychiatrist.

Platforms class was a lot of fun.  Before class started, Hestia wanted to go on the A frame, she LOVES the A frame!  So we got a few pics of that, one is the featured image up top on the page.

We worked on rear end work (Hestia didn’t do so well at this), we worked on the three different positions (front, heel up, and other side), and we worked on going to the platform from a distance.

10 minutes before class ended, I was really pleased with how she was going to the platform from a distance and sitting at a distance.  I should have stopped while I was ahead, but I asked Brad to take a video.  In the beginning of the video, Hestia ran off to the side to say hi to Bit’s dogs.  That should have been my clue that she was done with training seriously.  But no, I pushed more.

So Hestia ran off to have fun in the room!  She visited Bit’s dogs and the Setters, having a grand old time.  Eventually by me running away from her squealing her name, she came to me and I caught her and immediately put her back on leash!

I need to learn that those last 10 minutes she gets done with training, so I should leash up before that.  I also need to learn that if she runs off once, she is likely to do it again.  So the first time she ran over to Bit’s labs, I should have leashed her back up.

We had to leave class a little early to get to my psychiatrist’s office.

The psychiatrist’s office has a ramp to get up on the sidewalk that is far away from the main entrance (which has about 5 stairs).  As we were parking, I saw someone approaching the stairs with a rollator.  In the time it took us to park, unload, make sure the van door shut, and get down to the entrance, she had managed about half the steps.  We offered to help her, but she had two kids with her who were helping her.  We told her where the ramp is for future use.

We talked with many people in the psychiatrist’s office and Brad took a lot of pictures because it turned out he was running an hour late!  I could have stayed for the last 5 min of platforms class 🙁

Anyway, after we finally got in there, I discussed my mushy brain and increased agoraphobia problems, and he added a new atypical anti-psychotic to my regimen called Vreylar.  It is supposed to help not only with bipolar disorder, but also some cognitive function.  The psychiatrist gave me samples for a month, and if it works, we’ll have to do some finagling to get Medicaid to cover it. 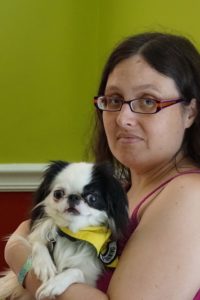 He also doubled my Klonopin.

Tomorrow we are training at the airport, so I’m not starting a new med tonight!  I need to be at least semi-functional for the airport trip!